The following stages are Double Elimination Stages. This means that the winner moves to the next stage and the losing team gets moved to the Loser bracket. 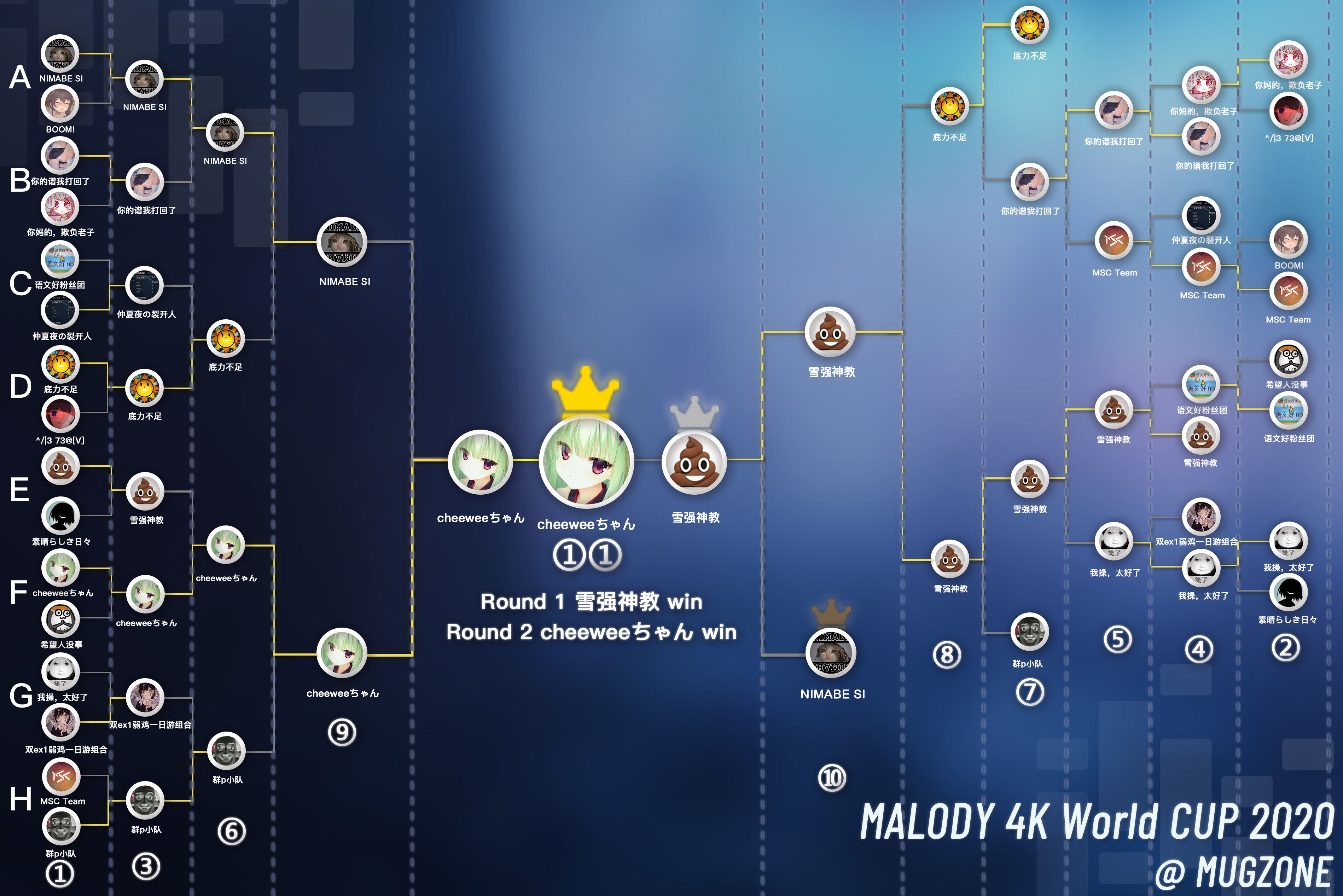 Malody Key World Cup 2020 (4K) (MKWC 4K 2020) is a competition between Malody 4K players in the world. It is held on both mobile and PC platforms at the same time.

The pattern of the competition is to create a Team multiplayer room that allows players on all platforms to join. Any judge is permitted to be used but Mods are prohibited.

P.S. The judge of Malody PC is much stricter than that of Malody Mobile. During the competition, we'll use Fair mod to let PC players use the judge interval of Malody Mobile to ensure fairness.

The Malody Key World Cup 2020 (4K) is run by various community members by distributing the multitude of tasks into various fields of responsibility.

Players who provide financial support for the competition,all of this money will be used to purchase physical prizes.

Players willing to participate in this competition can register through the webpage above.

Each team needs at least two players and up to six players.

Players from the same country can form different teams to register, multinational teams can also be formed.

Each team must have a team name, language is not limited but less than ten words

Each registered player will be checked and verified by the tournament manager and will be included in the national candidate list.

All players can sign up. As we have planned, there will be 32 teams in the competition. If the number of registered teams is less than 32, we will reduce it to 24 or 16. Of course, our aim is always to let as many teams as possible join in.

Seed Team: Teams with higher overall strength. They will be divided into eight-race areas to avoid premature encounters.

A referee will create a multiplayer room 10 minutes in advance. Players must gather during this period.

Each team is free to select up to one warm-up map. All maps must be Malody online map(Stable/Alpha map).

Representatives of two teams roll the point(send "$roll" in chat room),the winner of the !roll starts picking the first map of the match, and then take turns choosing.

The mappool of each round will be released in Malody Shop, No more use of Osu! integration package

One week before the official competition, you can download mappool charts in Malody Shop

There will be six mappools, Group Stage, Round of 16, Quarter-Finals, Semi-Finals, Finals, and Grand Finals.

The charts' difficulty increases step by step from Lv.12 to Lv.40 Chart in the World Cup mappool will not be more difficult than Lv.40

Refer to the chart for difficulty (Level 30 and above)

Thirty-two teams will be divided into eight groups, each with four teams.

The winning conditions at each stage are:

In the Group Stage, your team needs to win 4 maps to win a match. (Best-of-7)

In the Quarterfinals, your team needs to win 5 maps to win a match. (Best-of-9)

For the group tournament, the scoring system is adopted, and the two teams with high net scores are out of the tournament and enter the double-defeat elimination tournament.

P.S. If only 16 teams sign up, the group stage will be eliminated and the elimination of double-defeat competition will be directly entered.

The following stages are Double Elimination Stages. This means that the winner moves to the next stage and the losing team gets moved to the Loser bracket. 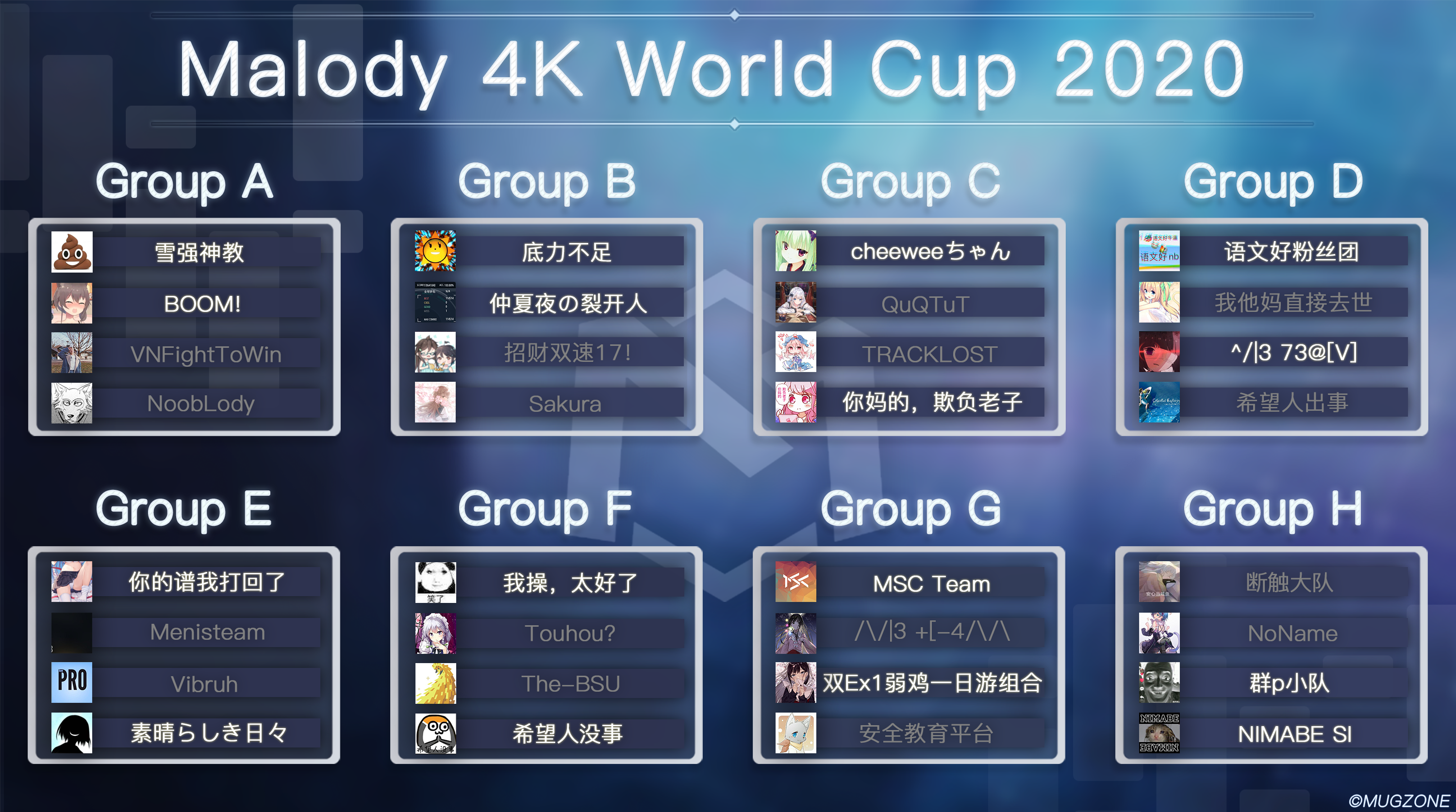 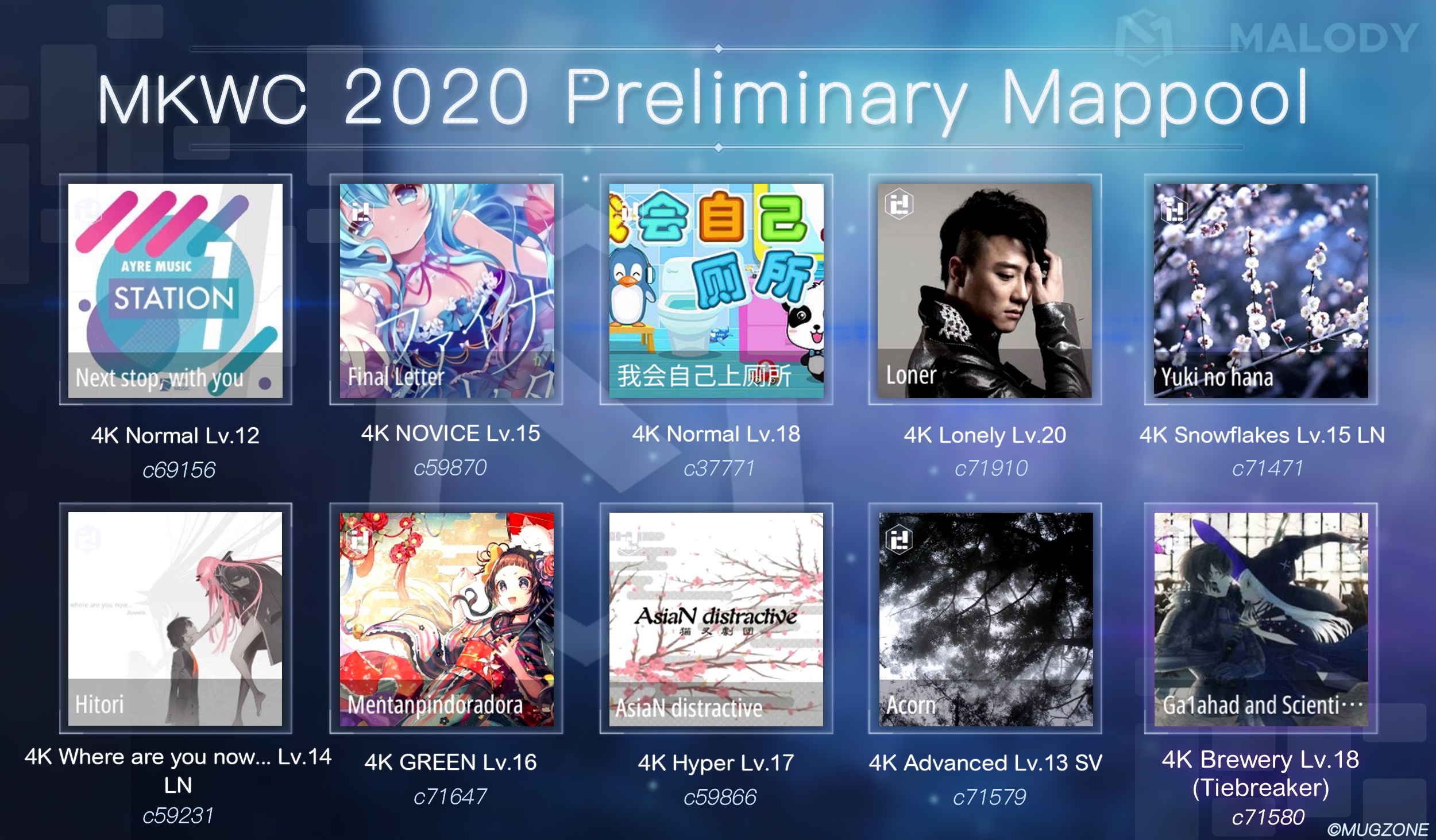 P.S. In the stages Quarterfinals and higher: Please inform tournament management before Sunday, If you and your teammates aren't available for the specified period of time, please let the captain inform the tournament manager in advance.

Reschedules will only be considered if both teams agree to a time at least 24 hours before the first match in that particular stage.

Captains are responsible for their team's availability. The bigger team size exists to ensure every team can provide at least two players for each match. If teams can not provide two players for a match and exceed the waiting time, the match will be considered forfeited.

2. You can sign up individually, then find a teammate and ask him to fill in your Malody ID in the column of captain ID. If you can't find a teammate, you can wait for the assignment.

4. The map that has been played cannot be reused in the same match.

5. If the match starts, one team does not arrive, the start time of the game can be delayed for up to 10 minutes; if one team is absent in half of the match, the maximum waiting time is 5 minutes, and the decision is overdue.

6. Exchanging players during a match is allowed without limitations.

7. One map will be given as a Tiebreaker map. This map will only be played in case of a tie.

(Tiebreaker map: The most difficult map in mappool, it can not be banned, can not be selected in advance).

8. If individual players cause too many delays, they will be banned.

9. If there is no game manager or referee, the game will be postponed.

11. If there are other accidents, the referee will be as tolerant as possible to deal with them.

All players and referees must be treated with respect. Instructions of the referees and tournament management is to be followed.

Each member of the 2nd Team will receive a runner-up medal + runner-up banner + a Marlo key chain & 10k Gold coins.

Moreover, we may add more gifts for the participants in the competition.

P.S. Cash rewards can be converted into other equivalent items such as gift cards.

2020.2.25 additional: thanks to the tons of chocolate purchased by Kassel for the champion/runner-up/third-place team, they will be distributed to the superior players at the end of the MKWC 2020.

2020.2.28 add thanks Yokkihane for the mysterious gift for the champion team members.

Malody 4K World Cup team reserve all the right for the final explanation.