Please submit your chart in this thread. The store page will be online soon in the month.

More comments you made to others, more likely your chart is displayed.

If you ever heard of Game Jams, this is exactly the same form of contest.

You will create and modify your chart under limited time, as well as commenting and scoring charts from other participants.

What can I do?

Just upload your own creation!

You can do it any time during the duration of the event, even if the charts are not finished. You can continue to polish the work after submission, or even after the contest.

As usual as in Game Jams, we will announce a theme for every Malody Chart Jam before starting. Your choice of song selection or chart style will be limited to it. You can, however, prepare beforehand or submit your already-finished work to Chart Jam; just don't be too naughty. If you are unsure, just ask for help, we will have special chat channels for this purpose. (See bottom of the page)

What will Chart Jam do for me?

We will not rank the submissions based on "scorings".

Instead, the level of anticipation and some else is quantified, which affects the ranking in live during the contest. You will also not win any prizes from the ranking; it will only affect the order of charts on the ranking boards.

We will invite publishers and famous chart creators to take look at all your submissions after the contest. Each publisher will select at most one chart, and give modification advices for you until the chart is capable of being stable in the in-game store. If you have made a chart set with complete difficulties, this will grant you a stable chart set. (and of course, stable chart set = free gold income)

Based on the outcome of the contest, everyone will be rewarded a good amount of gold for your support of the event. We will have more details on this in the future.

How are the ranking and reward calculated?

We will have a few ranking boards listed together. They will be based on 1) anticipation of the chart creator, 2) popularity of the chart, and 3) peer-reviewed scoring of the charts. Specifically:

When someone commented on your chart, and you decide that the comment is useful, you can explicitly give them a kudos under the comment. To do this, simply reply to people with any comments that includes the word "kudos" in it. "GkuDOS" or "kudos; drop table --" will both work as well. 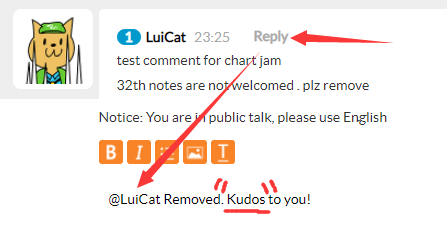 If you try to kudos multiple times to one commenter consecutively, only one kudos counts. The commenter can come back to make more comments after your kudos; at that time you can continue to give more kudos.

You can modify your comments in place and add/remove kudos if you think you've made a mistake.

This ranking is determined based on popularity of charts in both ascending and descending orders.

First of all, every chart will have a "pop score" for the next step. It is determined by the number of "recommended/not recommended", play counts, and comments of the chart, specifically, each play count is counted as 1 pop score, each "recommended" and "not recommended" for 20, and each comment for 100. (this might change before start of the contest)

After having pop scores for each chart, charts with the most and the least score will be displayed on the ranking board.

The scoring ranking is determined by the amount of awarded gold and “recommended/not recommended” that each chart gains from players. If you like any of the creations, just spam your gold on it. They will rank higher on the board and also gains all golds that you awarded.

With each gold stands for 1 point, additionally, each "recommended" will represent 500 points, and each "not recommended" will remove 500 points. From each player, only 2000 points is gained as the maximum. Gold from the author itself will not count towards this ranking.

As now, we cannot award gold to alpha charts. We will remove the rule "gold as score", and only keep "recommended/not recommended as score" for now. In the future we will add another way to allow scoring on each chart.

Charts will be randomly selected each day under a special category in the in-game store. Charts that ranks higher on the mentioned ranking boards would be more frequently to be selected.

Based on the ranking scores, we calculate a delta value for each competitor as below:

Having a larger delta value means the accumulated value will raise to top ones more frequently. However, based on the performance of this algorithm, numbers appeared above might be adjusted for a better balance.

When does it start?

You can submit anytime during February. In-game store page lasts until end of March, for exhibition purposes.

How do I submit?

We will open up a thread for registration in the forum. When the contest starts, you can register by posting the SID of your chart set under the thread.

Wall of Shame: What if people cheat?

Cheating on the rankings doesn't reward you anything but shame. After all, if your chart ranked high but doesn't match it's quality, it will be easily spotted by people.

If you find some submission suspicious, please contact us for further investigations. If cheating is spotted, we will make sure to mention them on top of this wiki page, and also in the discussion groups and as chart comments. No extra gold will be rewarded to them after the contest. Their name will be remembered long by publishers.

Special case: if the submitted chart totally misses the theme, it will be removed from the ranking board, until the author submits a different chart. Might have separate walls of shame for this purpose.

Can I ask a question? Where to have discussions?

Yes, of course. Find me in #chart-jam channel on Malody official Discord server, or discussion group 1095266240 on Tencent QQ (if you speak Chinese).